Mumbai Indians inched closer to elimination after setting themselves up for their first IPL 2022 win, only to slump to their fifth defeat on the trot as Punjab Kings won a high-scoring thriller by 12 runs in Pune on Wednesday (April 14).

A target of 199 looked imminently chaseable when teenagers Dewald Brevis (49 off 25 balls) and NT Tilak Varma (36 off 20 balls) were at the crease but Punjab bowlers did well enough to restrict MI to 186 for nine at the end of 20 overs.

Odean Smith (4/30 in 4 overs) redeemed himself after the horror last two balls against Gujarat Titans as he got two wickets in the final over for Punjab.

For Mumbai, eight wins in nine games with this kind of bowling attack looks near impossible. 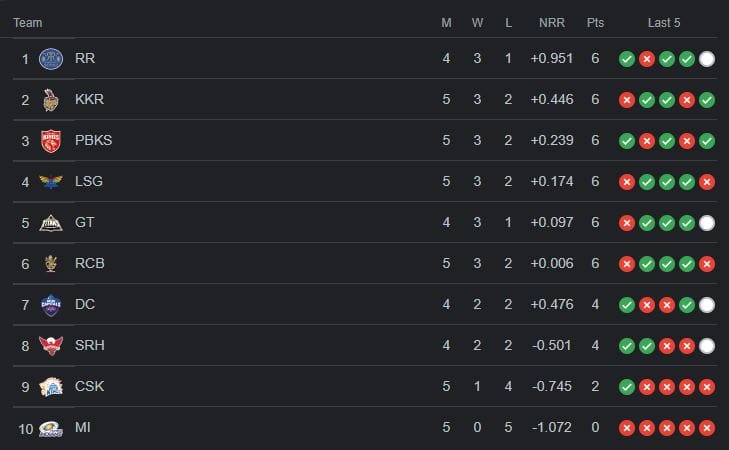 England’s Jos Buttler continues to lead the run-scoring charts with 218 runs from 4 matches. CSK all-rounder Shivam Dube zoomed into the second spot after his brilliant 95 off 46 balls against RCB on Tuesday night. Dube has 207 runs in 5 matches so far at an average of 51.75 and an incredible strike-rate of 176.92.

Rajasthan Royals’ leg-spinner Yuzvendra Chahal remains in number one position in the bowlers’ list with 11 wickets in 4 matches at an average of 9.45.

Kolkata Knight Riders (KKR) pacer Umesh Yadav is second in the list with 10 wickets from 5 matches. Delhi Capitals (DC) chinaman Kuldeep Yadav also has 10 wickets from 4 matches and he is third in the tally.

Centre waives off customs duty on cotton imports till September 30

Taliban smuggling weapons to Pakistan; to be used in cross-border terrorism against India: Report

Taliban smuggling weapons to Pakistan; to be used in cross-border terrorism against India: Report

Johnny Depp and Amber Heard trial: The individual net worth of the actors and ex-couple

Saira Banu is ‘extremely distressed’ after Dilip Kumar’s death, says ‘cannot get out of the loss’