Gujarat Titans batter Rahul Tewatia struck two sixes on the last two deliveries of the match off Odean Smith to snatch victory from the jaws of defeat against Punjab Kings in a thrilling encounter of the IPL 2022 here on Friday.

With 12 needed off the last two balls, Tewatia blasted two sixes at the Brabourne Stadium here to seal a six-wicket win for the Titans.

Meanwhile, the victory against PBKS means that GT are still unbeaten in the tournament and they are currently second in the IPL 2022 points table with six points from 3 matches. KKR are at top of the tally due to the better run rate than Gujarat.

Notably, PBKS are sixth in the points table having won two of their four games so far. 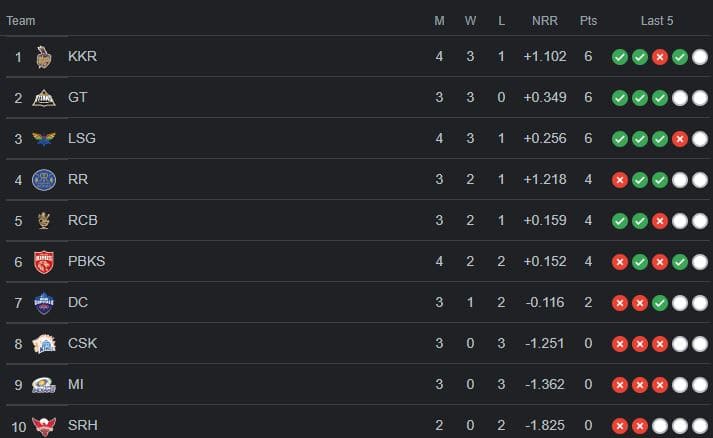 The Rajasthan Royals opener remains at the top of the top run-scorers list. After he scored brilliant century off 68 balls against Mumbai Indians last weekend, Buttler followed it up with a superb 70 against Royal Challengers Bangalore in their last match on Tuesday (April 5) but it wasn’t enough to secure a win for the Royals.

Meanwhile, GT opener Shubman Gill has climbed to second place after scoring 96 against PBKS on Friday night. Gill has 180 while Punjab Kings’ Liam Livingstone, who has so far scored 162 runs in the tournament, is third on the list.

Veteran India and now Kolkata Knight Riders pacer Umesh Yadav extended his lead at the top of the Purple Cap leaders, claiming 1/25 in four overs against Mumbai Indians. Yadav dismissed MI skipper Rohit Sharma in the last match and now had 9 wickets in 4 matches. Rajasthan Royals leg-spinner Yuzvendra Chahal is next on the list with 7 wickets in 3 matches while PBKS spinner Rahul Chahar is in the third spot with 7 wickets in 4 matches.