Defending Indian Premier League (IPL) champions have ended their losing run in the 2022 season with a 23-run win over Faf du Plessis-led Royal Challengers Bangalore at the DY Patil Stadium in Mumbai on Tuesday (April 12). After CSK’s win, five-time champions Mumbai Indians are the only team without a single win this season as they get ready to face Punjab Kings in their 5th game of IPL 2022.

CSK posted 216 after electing to bat first and restricted RCB to 193/9 in reply to give a boost to their NRR, which is currently -0.745 currently. Du Plessis-led team have slipped to 5th place on the points table and have 6 points from 5 matches so far. The RCB’s NRR is at 0.006, while Gujarat Titans who are in 4th place have a NRR of 0.097.

Ravindra Jadeja’s CSK, though, have a lot of work in front of them to catch up to table-toppers Rajasthan Royals, who have 6 points from 4 matches so far with an NRR of 0.951. 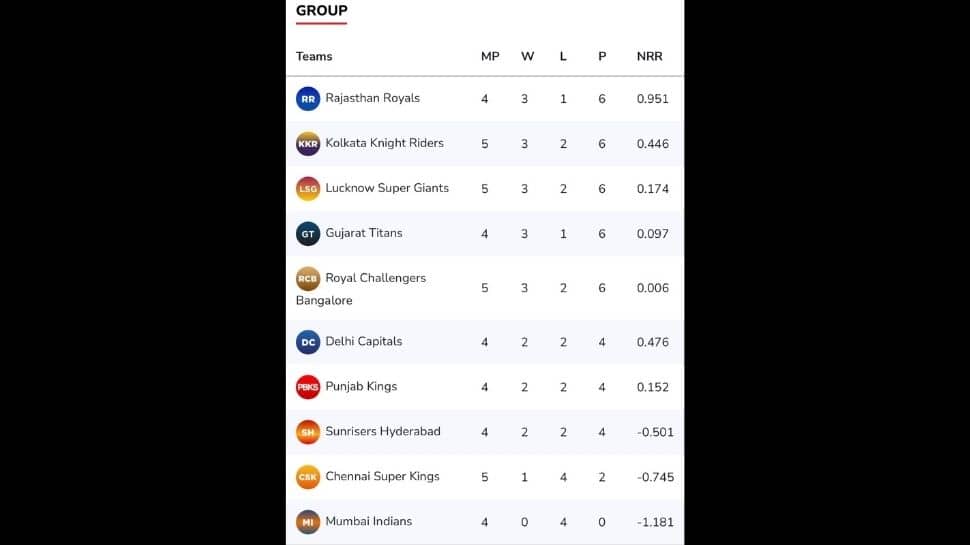 England’s Jos Buttler continues to lead the run-scoring charts with 218 runs from 4 matches. CSK all-rounder Shivam Dube zoomed into the second spot after his brilliant 95 off 46 balls against RCB on Tuesday night. Dube has 207 runs in 5 matches so far at an average of 51.75 and an incredible strike-rate of 176.92.

Dube’s teammate Robin Uthappa, with whom he put on 165 runs for the third wicket, has also climbed up to third place in the Orange Cap race with 194 runs in 5 games. Uthappa smashed a career-best IPL score of 88 off 50 balls.

Rajasthan Royals leg-spinner Yuzvendra Chahal remains in number one position in the bowlers’ list with 11 wickets in 4 matches at an average of 9.45. RCB spinner Wanindu Hasaranga rose to 4th spot after claiming 2/35 against CSK in the last match.

Hasaranga has 10 wickets, same as Kolkata Knight Riders (KKR) pacer Umesh Yadav, who is second in the list with 10 wickets from 5 matches. Delhi Capitals (DC) chinaman Kuldeep Yadav also has 10 wickets in the 10-team tournament.

Russia war a ‘genocide,’ trying to ‘wipe out’ Ukraine, says US President Biden

IPL 2022: Bhuvneshwar keeps SRH in Playoffs hunt with maiden 19th over vs MI