Hardik Pandya’s Gujarat Titans have risen to the top of the IPL 2022 points with their fourth win in first five games of the season. GT thrashed Sanju Samson-led Rajasthan Royals by 37 runs at the DY Patil Stadium in Mumbai on Thursday (April 14).

GT now have 8 points from five matches with a NRR of 0.450 ahead of Kolkata Knight Riders, Rajasthan Royals, Punjab Kings, Lucknow Super Giants and Royal Challengers Bangalore, all have 6 points each so far.

The Royals were in top spot heading into this match but have slipped to 3rd place as their NRR took a big blow, going down to 0.389. Shreyas Iyer’s KKR will now look to take the top spot back from GT with a big enough win over Sunrisers Hyderabad on Friday (April 15) night. 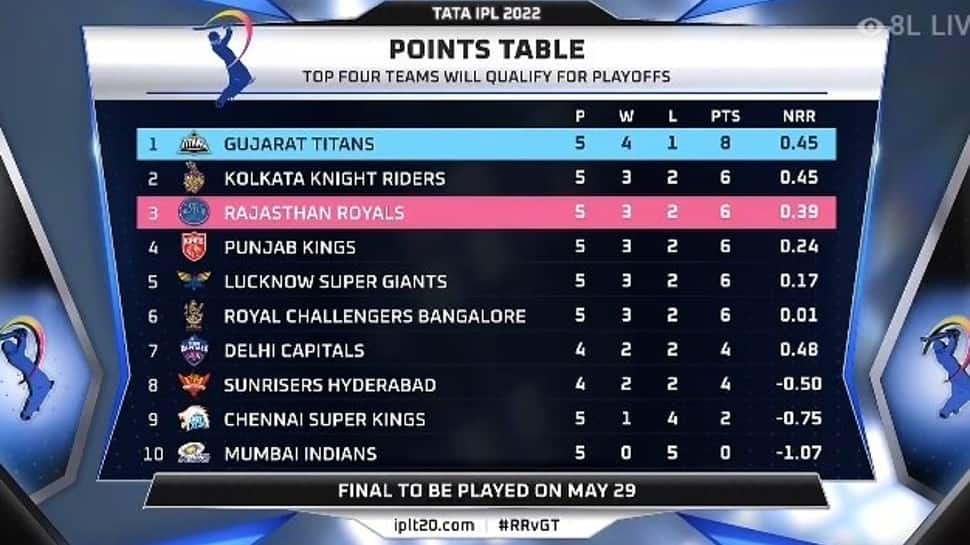 RR opener Jos Buttler continues to lead the run-scoring charts, notching up 272 runs in 5 matches at an average of 68 and strike-rate of 152.8. Buttler smashed 54 off 24 balls against GT with three sixes and eight fours.

GT captain Hardik Pandya rose to 2nd spot in the Orange Cap race with his second successive fifty-plus score in IPL 2022. Hardik top-scored with 87 off 52 balls with 4 sixes and 8 fours to power his team to 192/4 after batting first.

Rajasthan Royals leg-spinner Yuzvendra Chahal retained his Purple Cap, improving his tally to 12 wickets in 5 matches after claiming 1/32 against GT. Chahal’s 12 wickets have come at a brilliant average of 11.33. Umesh Yadav of Kolkata Knight Riders and Delhi Capitals’s Kuldeep Yadav are second and third in the bowlers’ list with 10 wickets each.

GT pacer Lockie Ferguson rose to the fifth spot in the Purple Cap, claiming 3/23 against the RR on Thursday night. The New Zealand and GT fast bowler now has 8 wickets in 5 matches at an average of 19.25.

‘Stop looking at me and…’, CSK’s throwdown specialist reveals

Badshah and J Balvin come together for ‘Voodoo’ song | WATCH