Inaugural Indian Premier League (IPL) champions Rajasthan Royals have moved up to the top of the IPL 2022 points table after ekeing out a three-run win over KL Rahul’s Lucknow Super Giants at the Wankhede Stadium in Mumbai on Sunday (April 10). Sanju Samson-led Royals posted their third win in four games and have a NRR of 0.951.

IPL 2021 runners-up Kolkata Knight Riders slipped to the 2nd spot after suffering a massive 44-run loss to Delhi Capitals in the first game of the day on Sunday. As a result, the KKR run-rate has dipped to 0.446 with three wins and two losses in their first five games of the season. 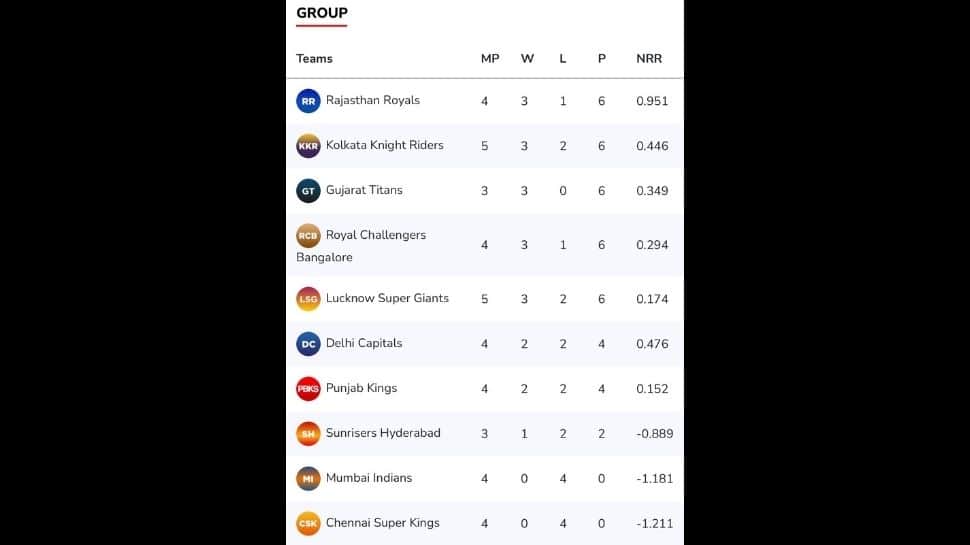 DC, on the other hand, are currently in the 6th spot behind LSG. Rishabh Pant’s side have 4 points from 4 matches while debutant LSG have 6 points from 5 matches till date. LSG also suffered their second loss of the season after winning their last three matches on the trot.

The Rajasthan Royals opener continues to lead the run-scorers list. Buttler has extended his lead at the top and has 218 runs in 4 matches with 1 hundred and 1 fifty. The England wicketkeeper had a rare failure against LSG, scoring 13 off 11 balls.

Quinton de Kock of Lucknow Super Giants moved back up to 2nd place with 188 runs in 5 matches after scoring 39 off 32 balls with two fours and 1 six against RR. Gujarat Titans opener Shubman Gill is in 3rd place with 180 runs.

Buttler’s Rajasthan Royals teammate Yuzvendra Chahal is now new holder of the Purple Cap. The Royals leg-spinner picked up 4/41 against LSG to move into top spot with 11 wickets in 4 matches at an average of just 9.45.

KKR’s Umesh Yadav slipped down one spot after claiming just one wicket against DC. Umesh now has 10 wickets in 5 matches. DC chinaman bowler Kuldeep Yadav is currently in third place now with 10 wickets in 4 matches after picking up 4/35 against KKR.