Former India cricketer Kapil Dev on Sunday denied reports of him joining politics. The World Cup-winning captain share a post on his Instagram to confirm the same. Kail shared a story on the social media account. He has said that he is disappointed with people spreading fake news. Even though some of Kapil Dev’s teammates have entered politics, he stayed away from it. 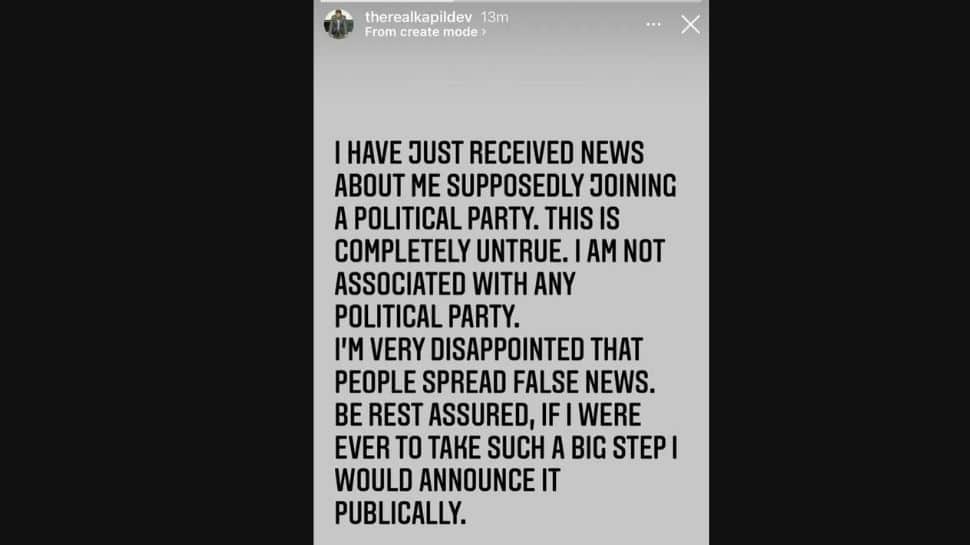 “I’ve just received news about me supposedly joining a political party. This is completely untrue. I am not associated with any political party. I’m very disappointed that people spread false news. Be rest assured, if I were ever to take such a big step I would announce it publicly,” Kapil Dev posted on his Instagram story.

There were reports that the legendary all-rounder will be joining Aam Aadmi Party (AAP). A photo of Kapil and Delhi CM Arvind Kejriwal went viral on social media.

In 2009, Kapil disclosed that he was approached by political parties. “I have been approached by every party. But I am not thinking about politics at this time. Though, I always want good people to join politics,” he had said.

Cricketers joining politics is not a new thing in India. Earlier this year, Harbhajan Singh joined AAP. Navjot Singh Sidhu has actively been participating in politics. Manoj Tiwari and Ashok Dinda are currently members of the West Bengal Legislative Assembly.

Talking about Kapil Dev, he has donned various roles since his retirement from the game of cricket. He was the head coach of Team India in 1999. Then he was also seen in the commentary box. Now Kapil works as a cricket analyst.

Breaking: Harmanpreet says arrangements being made to broadcast IND-SL games

‘I would have stopped Rishabh Pant from becoming captain’