Alia Bhatt and Ranbir Kapoor’s intimate wedding was all about kisses, smiles and laughter. The couple who tied the knot on Thursday (April 14) in the presence of family and their close friends are melting hearts on the internet with their adorable gestures. Bollywood’s much-loved couple, Alia and Ranbir have set new couple goals and redefined the idea of celebrity weddings by keeping it simple, short and everything nice. Amidst the several pictures and videos that have been surfacing on the internet, a video from their varmala ceremony has won the hearts of their fans.

In the viral video, as groomsmen lift Ranbir high up, Alia can be seen struggling to put the varmala in Ranbir’s neck. At one moment Ranbir suddenly gets down on his knees before Alia so that she could put the garland on him. The actor finally seals it with a kiss.

After the wedding, the couple cut three tier cake and also raised a toast to new beginnings as husband and wife. 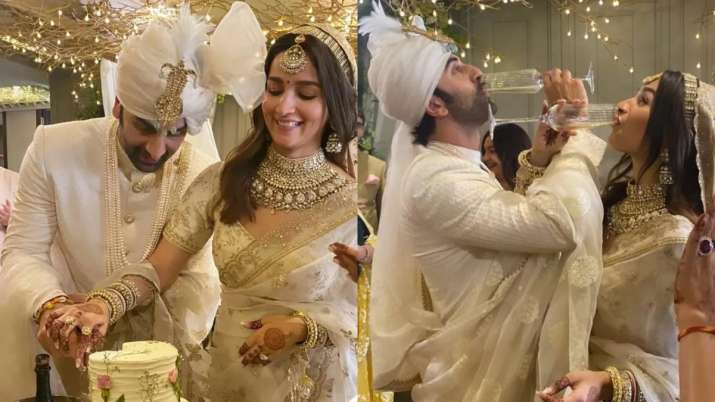 Later, Alia took to Instagram and shared first pictures as his wife. Dressed in an off-white saree with golden zari work all over it, Alia looked graceful as a bride. Ranbir complemented his wife in an off-white sherwani.

Alongside the post, Alia penned a heartfelt note, sharing why they chose to celebrate the wedding day at Vastu. “Today, surrounded by our family and friends, at home … in our favourite spot – the balcony we’ve spent the last 5 years of our relationship – we got married. With so much already behind us, we can’t wait to build more memories together … memories that are full of love, laughter, comfortable silences, movie nights, silly fights, wine delights and Chinese bites,” the post read.

She also thanked everyone for their love and support. “Thank you for all the love and light during this very momentous time in our lives. It has made this moment all the more special. Love, Ranbir and Alia,” the post concluded.

Gama Pehelwan’s 124th Birthday: All you need to know about The Great Gama