Superstar Sanjay Dutt has been grabbing eyeballs with his fierce avatar of Adheera in ‘KGF: Chapter 2’. As the Prashanth Neel directorial released today (April 14) the actor’s transformation into a deadly villain has been garnering immense love from the audience. Not just fans but his wife Maanayata also couldn’t hold herself back from singing praises for the actor. Maanyaata took to Instagram and shared a short clip of Sanjay’s look as Adheera from the film.

In a special message to her husband, Maanayata said, “The film has been a special journey for us in more ways than one. All those who have often labelled him as irresponsible, non-committed and a bad boy must watch this film to see his determination, dedication and commitment. Sanju shot this film during the most vulnerable phase of his life… our lives. He shot uncomplainingly, all those strenuous scenes with the same passion as ever. For me he is the HERO of the film.  Cool, powerful, spirited and a fighter to the very end!  KGF2 belongs to Adheera! Having said that, Sanju is back with a bang, and he couldn’t have said it better himself – aa raha hoon mein.” 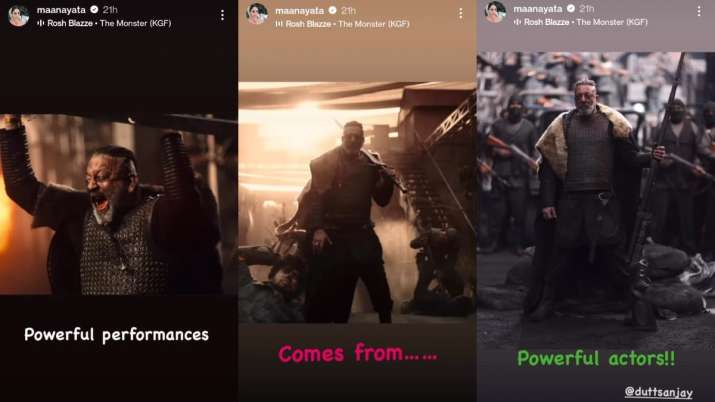 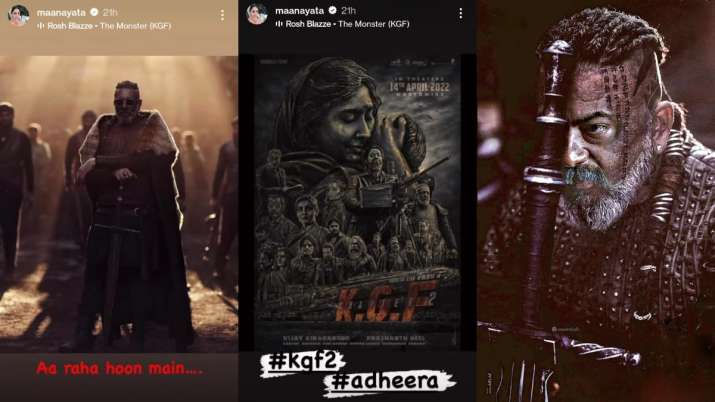 For the unversed, it was Sanjay’s wife Maanayata who encouraged him to take the role of Adheera in KGF 2 which marks his acting debut in Kannada. During a trailer launch of the film he had said, “This journey of KGF Chapter 2 has been a lesson for me after 45 years. This film was made as a family even the spot boys, the junior artist we are all family. I want to thank Yash for being a superb co-star such a humble man, my younger brother. Thank you Raveena, Prashanth thank you for making Adheera. Most importantly I want to thank my wife who pushed me to do KGF 2”

KGF Chapter 2 marks Sanjay Dutt’s first film after battling cancer. Talking about his post-recovery journey and return to the KGF Chapter 2 shoot Sanjay said, “I started getting back into my training schedule as soon as doctors and my body could allow it. I have been leading a fairly disciplined life since my recovery. So while the journey has been challenging I have loved every part of it. As I said earlier I have been blessed that I had Maanayata and the kids by my side constantly, cheering me on.”

He added, “Other than my wife being my biggest strength and my kids’ motivation, team KGF was very supportive and accommodating. Prashant’s concern was my health and comfort…. mine was Adheera!”

Meanwhile, Sanjay Dutt will next be seen in Ghudchadhi to be directed by Binoy Gandhi, Shamshera and Toolsidas Junior.

Video: Joe Biden’s ‘ghostly’ handshake with nobody! Twitter has a field day